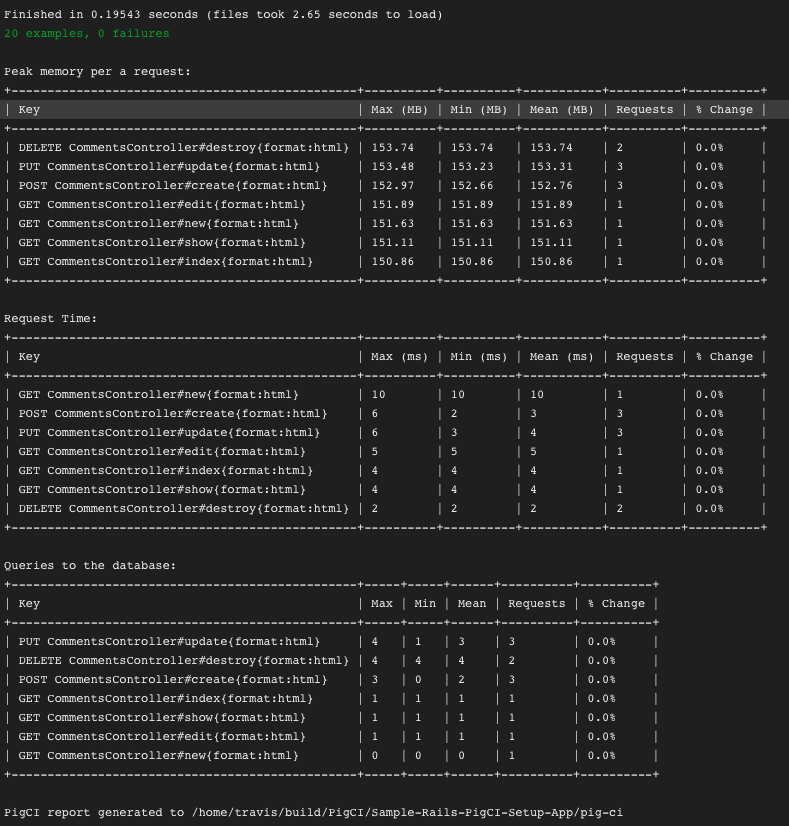 Please consider supporting this project by adding PigCI to your GitHub project & using this as part of CI. The CI tool will fail PRs that exceed metric threshold (e.g. a big increase in memory).

Add this line to your application’s Gemfile:

With PigCI.com - For sharing runs as a team via CI

You can hookup your project to PigCI.com, this will fail PRs when metric thresholds are exceeded (e.g. your app see a big increase in memory).

It’s a great way to track metrics over time & support this project.

This gems was setup to be configured by passing a block to the PigCI.start method, e.g:

You can see the full configuration options lib/pig_ci.rb.

Currently this gem only supports Ruby on Rails.

Minor fluctuations in memory usage and request time are to be expected and are nothing to worry about. Though any large spike is a signal of something worth investigating.

By default, this gem will tell Rails to eager load your application on startup. This aims to help identify leaks, over just pure bulk.

You can disable this functionality by setting your configuration to be:

Often the first request test will be slow, as rails is loading a full environment & rendering assets. To mitigate this issue, this gem will make a blank request to your application before your test suite starts & compiling assets.

You can disable this functionality by setting your configuration to be:

After checking out the repo, run bin/setup to install dependencies. Then, run rake spec to run the tests. You can also run bin/console for an interactive prompt that will allow you to experiment.

Bug reports and pull requests are welcome on GitHub at PigCI/pig-ci-rails. This project is intended to be a safe, welcoming space for collaboration, and contributors are expected to adhere to the Contributor Covenant code of conduct.

Everyone interacting in the PigCI project’s codebases, issue trackers, chat rooms and mailing lists is expected to follow the code of conduct.