Aren't you sick of your website going down because one of your MongoDB instances fell over? 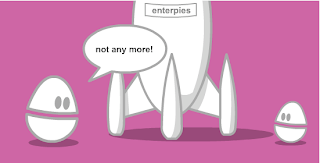 The Mongo client is instantiated using a list of hosts and a retry strategy:

You use it by wrapping blocks of code that use Mongo in a block:

This block may throw an exception, depending the retry strategy in use. Beware that if Mongo goes down part-way through the execution of the block, the block may be retried from the start when Mongo comes back. Make sure you don't insert things twice etc.

The API required by Weebl is very simple. You just need to declare how to get a connection, what type of exception the underlying client will throw if it's disconnected, and what to do if the connection fails. For example the Mongo one looks something like this:

The options passed in the constructor become available as method calls inside your class, e.g. :hosts in the above example.